We have joined together with the National Online Safety (NOS) Campaign so together we can make it our mission to make the internet a safer place for children. We believe that through engaging Online Safety resources and through equipping parents and children with the knowledge they need to understand online dangers, we can together make a difference.

The NOS provides guides for parents as part of their #WakeUpWednesday campaign and it is viewed as one of the most trusted and reputable learning resources in the UK, providing expert advice on the latest platforms and online risks that parents and carers need to know about.

We shall be sharing these weekly guides with parents every Wednesday via our Parent Hub App and they are also available below.

Parents and Carers Guide to How to Combat OnLine Bullying

Defined as “ongoing hurtful behaviour towards someone online”, cyber-bullying makes its victims feel upset, uncomfortable and unsafe. In the digital world, it has numerous forms – such as hurtful comments on a person’s posts or profile; deliberately leaving them out of group chats; sharing embarrassing images or videos of someone; or spreading gossip about them. Cyber-bullying can severely impact a young person’s mental health … so, in support of Anti-Bullying Week, we’ve provided a list of tips to help trusted adults know what to look for and how to respond to it.

In the guide, you'll find tips such as playing online games with your child, talking about your child’s online life and being prepared to listen without showing any judgement or criticism.

Parents and Carers Guide to Amigo

Amigo is a social platform which purports to connect strangers from around the world – and, with built-in translation software, it reduces the expected language barriers. Focusing heavily on one-to-one chat, video calls and live streams, Amigo encourages its users to build up online relationships to unlock exclusive features such as private video and audio calls: essentially, the more that people chat, the more features become available to them. This is an app designed with mature users very much in mind and is therefore definitely not recommended for children.

In the guide, you'll find tips on a number of potential risks such as inappropriate contact, strangers and membership costs. 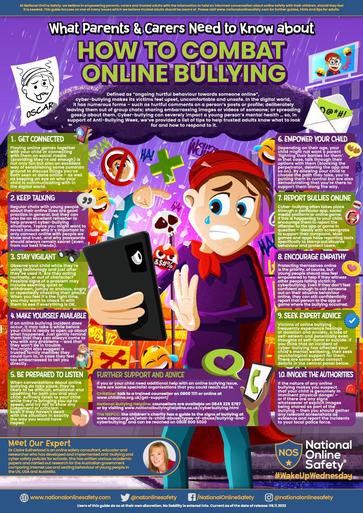 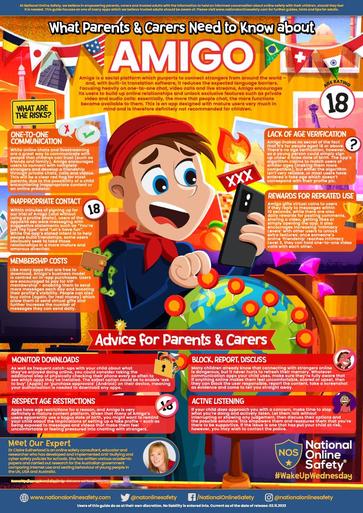 Some children in school have been discussing online characters called Huggy Wuggy and Mommy long legs which are from a game and TV show called Poppy Playtime.

The animated character goes by the friendly name of Huggy Wuggy, leading parents and children to believe the videos are aimed at youngsters and contain no inappropriate material. However, the blue bear-like creature chases and threatens other characters in nightmarish scenarios, leaving many young children upset and frightened.

The character is from a survival horror game called Poppy Playtime, but has been made into popular videos which appear on YouTube and have seemingly slipped through parental controls. Poppy Playtime first appeared on Steam and is made by indie developer MOB Games. In it, the player plays as a former employee who is revisiting an abandoned toy factory previously owned by the game’s in-universe company Playtime Co.

It is available on the App Store and Android store and has a PEGI 12 rating, meaning it is only suitable for people over 12. Toys representing the character are sold on Amazon. The Huggy Wuggy character has also been recreated on Roblox, a virtual community where users can create their own 3D worlds with their own game players.

What is Poppy Playtime?

The game involves staying alive in a horror puzzle adventure. Within the game, vengeful toys wait for players in the abandoned toy factory. Players must grab packs in order to hack electrical circuits or nab anything from afar. As players explore the mysterious facility you try not to get caught.

This game is not suitable for primary aged children as it contains some frightening and disturbing content that is very upsetting to view.

Netflix’s Squid Game is set to become the streaming service’s most successful show of all time, with huge numbers of viewers taking to social media to discuss each new episode. The South Korean thriller features some scenes of fairly brutal violence and is rated 15 by the BBFC. It follows a group of adults who compete to win innocent-looking playground games, but who are killed if they do not succeed at the tasks.

Squid Game’s 15 rating has not prevented clips and images from the show being uploaded onto social media sites such as TikTok, with the #SquidGame hashtag being viewed more than 22.8 billion times. There have been reports of children who have accounts on these platforms inadvertently viewing gory, explicit scenes from the programme, and parents and carers should be mindful of the prevalence of these uploads.

A Youtuber called Chad Wild Clay posts You Tube videos that look and sound very child friendly but when you watch them they are actually about weapons - knives, knuckle gloves that can have blades attached, concealed knives in everyday objects.

The most concerning thing is that these videos are targeting younger children and there is no age restriction attached.  If parents glanced at the video they could think it is suitable for their child to watch as it is just like the videos where children are opening surprise toys.

Please could parents be aware that the game does feature violence, in-game purchasing, and also the option for group chat, which is unfiltered and accessible to strangers.

As with any age restricted programs  our guidance is to avoid the game.

This group video chat is a video-focused social media app.  Friends (and friends of friends) can communicate with each other via live video and texts.  There is no screening and the video is live, there's always the possibility of inappropriate content for children

These resources provide guidance for parents and carers to keep children safe online. They will, amongst other things, support you to talk to your child about a range of online safety issues, set up home filtering in a child-friendly way and set up age-appropriate parental controls on digital devices:

If you have any safeguarding concerns then please contact your child's class teacher in the first instance or Mrs L Wilson, the Designated Safeguarding Lead, on enquiries@bracebridge.lincs.sch.uk

Unfortunately not the ones with chocolate chips.

Some cookies are necessary in order to make this website function correctly. These are set by default and whilst you can block or delete them by changing your browser settings, some functionality such as being able to log in to the website will not work if you do this. The necessary cookies set on this website are as follows:

Cookies that are not necessary to make the website work, but which enable additional functionality, can also be set. By default these cookies are disabled, but you can choose to enable them below: